When we bought the bicycle store in 1994, there was a lot of inventory. Quite a lot. There

Water Street location. Bill, who took over the business when Todd couldn't pay the bills

liked to buy. And buy he did, almost to the day until we were ready to sign the purchase

agreement. Sales reps knew they could get Bill to buy their closeouts when they needed

There was almost every tool imaginable for servicing bicycles crammed into the repair area.

Both a wooden Campagnolo tool box and a rather rare, Zeus tool kit, of which I only have

heard of one other. Most stores didn't own either one, and we had both. There was the

Phil Wood spoke machine, a luxury tool if ever there was one. While we really didn't buy

it, was on semi permanent loan and resided in the store until Bill reclaimed it as we readied

to close the doors. I would still like to buy it back from him!

There were rental bikes and new bikes from many vintages, skiis and Roller Blades. Parts

made of. There was an awful lot of stuff.

A repair that had been in the store for who knows how long, a couple years for sure by

that time we closed the deal to purchase the store. It belonged to a woman named Molly

Parker. She had dropped off her Fuji road bike for service, and been called many times

to pick up her finished repair. The notes listed at least 8 or 10 attempts to encourage her

to get this bike out of the store. It occupied the 15 cubic feet every assembled bicycle

does and had become an albatross like fixture of the shop.

Now, we could have sold this non-descript road bike as abandoned. There were times I

had to move it to get at something it was blocking. I am sure many an employee had

tripped over it as well and it likely caused a scratch or two on new bikes over the years.

Yet it lived in the basement of the store. I was determined to get my money out of it as it

had been listed on our original purchase agreement.

forced our hand. The decision to close was made, the date set for our being out of the

building and the notice painted across the front widows, big and bold:

Bicycle retail was changing and we were spent. I believe that the both the other business'

in town and regular customers were stunned. The bike store would be gone.

The last day of retail was scheduled to be around March 20th, with an auction to end it

all and remove the last vestiges of the little bike store at 229 Water Street. We needed

to be out before April 1 to avoid the burden of a new and very expensive lease.

In retrospect, the date slated for final operation was very appropo, all things considered.

For us, that was a full 7 years of bicycle retail. 364 plus weeks of running a small business

which I was never really able to make pop. It wasn't for lack of trying but more as a result

of decisions made and just as likely, losing focus.

Perhaps it was also the numbers. While on paper they looked good and profitable. There

certainly was enough inventory to make it fly. We had not invested in any tools or fixtures

as there were multiples of both. We were careful with our dollars, but not not enough so.

I can attribute some if it to the former owners lack of clarity. They had worked for free.

Their time was never posted to the payroll. Endless hours in the off season. One or two,

no cost bodies for the innumerable days when no business was transacted. Merlene was

half owner and spouse of Bill. She had cable TV, piles of books to read, crocheting

or knitting (something of that sort) filling her days. She had her cat and dog for company.

And, she did take care of the occasional customer. Merlene knew enough about bicycles

offered. She could also do some of the operational things inherent in a retail store,

but mostly she was just there. Her time at no expense to the store.

Bill came in after after school. You see, he was a teacher and came after about 4 PM to

work for a few hours. Each Saturday and all summer Bill worked full time in the store.

Sure, they had some employees and service staff, but 60 to 80 hours a week of off the

Now back to the Fuji repair and the tale of Molly Parker.

We started to bring goods from the basement and various cubby holes, everything had

to move. The skiis and bicycles, both new and used had to go We sold some of the

service tools and clothing racks. The display cabinets and slatwall hooks. We sold the

clothing, which would have yielded a better tax deduction from donating it than we

realized by selling it. It was amazing what actually moved in those final days.

But what to do with the Fuji repair? A standing joke and the dollars tied up in it. A

physical entity with a receivable entry still the books. It was hung it up in the area

formerly occupied by the more current repairs while its fate was to be determined.

Two or three days before we closed the doors for good, a mature woman came into

the store. Someone I did not recognize as being a regular customer for sure. She wore

a spring hat adorned with flowers, and had a print dress on. Not a bicyclist as one would

envision. As the store closing sale was in full swing there were many people coming and

going, all looking for the bargains when a business closes its's doors. New faces were

I often wondered where all these people shopped when the store really needed them?

This woman did not look about the place, but came directly up to the checkout area.

"I've come to retrieve my repaired bicycle. I hope you still have it because it's been here

for a while", she quipped.

There were a few bicycles hanging around that had collected a bit of dust, so her request

really did not set off any particular bells.

I went to the file with repair tickets, looked up, and ask her name.

"Molly Parker, and my bike is a Fuji".

It was her. The Molly Parker of store legend, standing there as casually as if she were

picking up a repaired bicycle dropped off just a day or two earlier.

gathered myself. Without skipping a beat, I pulled the pin from her repair tag, which

now occupied a special place on the cork board, rang up the repair and told her the

total amount of her bill.

her, both before and after we bought the place. Or that she had moved out of the area.

Or that she just didn't want the bike, as the bill was equivalent to about 60% of the

But there she stood there, patiently waiting for her bike to come from the mothballs. 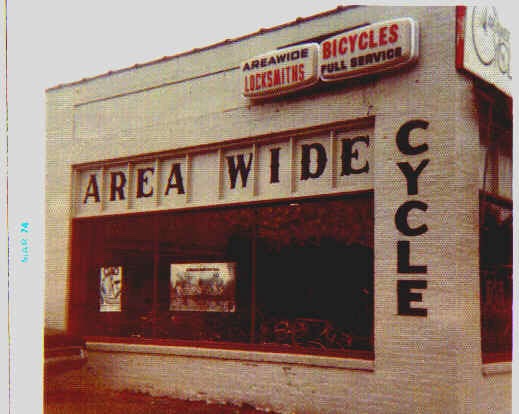 I told her it would be a few minutes as I made the bike ready to ride once again. I pulled

it from the storage hooks, wiped it down, loaded the tires with air, ran through the gears

and squeezed the brakes. We hadn't done the repair during my tenure, so I wanted to

make sure this storied bicycle was mechanically sound when I delivered it to its rightful,

We exchanged some additional pleasantries, she signed and dated her check and walked

out of the store, into the ether of Excelsior from which she had appeared. I cannot say for

certain whether this was the final repair to leave the store, but I do know that Molly Parker,

picking up her repaired Fuji, did allow me to close out one entry on the balance sheet from

I wonder if I should have charged her for storage?