No matter what your specialty is, photography or football. skydiving or microbiology, when

same industry, you can get a certain feel about them.

Bicycles are no different. The vernacular usually gives it away, but there are other cues as well.

level. The insider wannabe's and others who may want to trip up an unsuspecting retailer with

In this case it was none of the above.

This story began with a family looking for a new BMX bike for their son a month or so earlier.

I had waited on them, pointing out the features and benefits of the Redline models to them

was easy. Because of the store's success with the brand we actually had given one to our son.

The info was part of my sales pitch, it fit the scenario and it was sincere.

They left with a chrome Redline 320, a very nice first BMX bike.

for bicycles purchased from us. It usually was longer that thirty days, and many times the

customer came back multiple of times for the free "one". That is a tale for later.

( they were about 35 cents apiece at that time), adding the tuneup to the repair calender

and making a kid wait a couple of days for their bike to be ready.

Mary, as I knew her, brought the bike in on a weekday morning for it's 30 day. We chatted

a bit and I sent the Redline to the service guys for the needed adjustments. Mary wandered

about the store looking pretty comfortable in that environment, one where many women

are not. I recall getting that feeling that she knew bicycles as I went about my business.

I always tried to chat with customers. It was a time drain at times, but it was me. After a

while of her wondering about the store we began a conversation. It wasn't that she entered

a jargon laden, know it all conversation. Just a normal interaction of retailer and customer.

After a few minutes she offered this little tidbit, "Rus, I just wanted to let you know that

this was the first bicycle my family had ever purchased".

On background, AWC was located in the western suburbs of Minneapolis, with very strong

demographics, quite a number notable citizens and a pretty high standard of living. Many of

these folks would regularly donate their old stuff to some organization and buy new. Of course,

we did have customers of more modest means that would seek out a good used model. Like

all areas, there also were the bottom dollar deal hunters as well . In today's vernacular, the

region had a significant proportion of the one percent-ers shopping with us.

To have someone say that they, or their family, had never purchased a bicycle was truly

"You mean a Redline bicycle?" I inquired.

"A BMX bike?" was my next question.

"No" again was the response from Mary.

Now she had me, and I could tell she was having some fun with this one.

"This is the first bicycle any member of my family had ever bought at all".

"Didn't you ever get a new bicycle as a child?" was my response.

"Sure" she continued "lots of them."

"When my brothers, Ed or Richard or I wanted a new bicycle, we were told to go

Her husband, Peter Davis, had been the Director of Corporate Planning during brother

Custom bicycles, occupying the space where the premier Schwinn Paramounts were built. 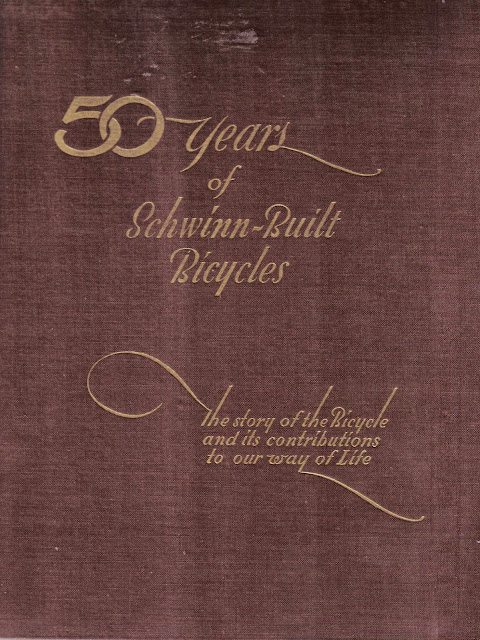 had purchased from a regular bicycle store - ever.

My intuition proved correct.That sense that one gets when you encounter someone who

knows a lot about the same stuff you do.

In this case, most likely a lot more than I did!